Back to School Directory 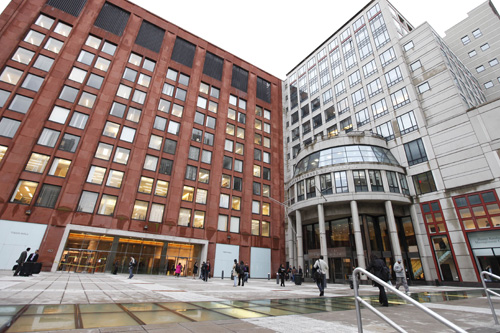 More than 175 years ago, Albert Gallatin, the distinguished statesman who served as secretary of the treasury under Presidents Thomas Jefferson and James Madison, declared his intention to establish "in this immense and fast-growing city ... a system of rational and practical education fitting for all and graciously opened to all." Founded in 1831, New York University is now one of the largest private universities in the United States. Of the more than 3,000 colleges and universities in America, New York University is one of only 60 member institutions of the distinguished Association of American Universities.

From a student body of 158 during NYU's very first semester, enrollment has grown to more than 40,000 students attending 18 schools and colleges at five major centers in Manhattan and in sites in Africa, Asia, Europe, and South America. Today, students come from every state in the union and from 133 foreign countries. The faculty, which initially consisted of fourteen professors and lecturers (among them artist and inventor Samuel F. B. Morse), now totals over 3,100 full-time members whose research and teaching encompasses the humanities, the sciences, and the social sciences; the law; medicine; business; education; the fine arts, studio art, and the performing and cinematic arts; music; social work; public administration; the ancient world; and continuing and professional studies. With more than 2,500 courses offered, the University awards more than 25 different degrees. Although overall the University is large, the individuals schools and colleges are small- to moderate-sized unitseach with its own traditions, programs, and faculty  and there are many communities to be found within the NYU community based on interests, activities, and shared experiences.

The center of NYU is its Washington Square campus in the heart of Greenwich Village. One of the city's most creative and energetic communities, the Village is a historic neighborhood that has attracted generations of writers, musicians, artists, and intellectuals. NYU, in keeping with its founders vision, is in and of the city: the University  which has no walls and no gates  is deeply intertwined with New York City, drawing inspiration from its vitality.

In addition to its Manhattan locations, the University is also located in Brooklyn with the second oldest school of engineering and technology in the country, and has research facilities, notably the Nelson Institute of Environmental Medicine, in Sterling Forest, near Tuxedo, New York.

And NYU has established itself as the first global network university, with a comprehensive liberal arts campus in Abu Dhabi  the first to be operated abroad by a major U.S. research university  and other sites for study and research in Accra, Ghana; Berlin, Germany; Buenos Aires, Argentina; Florence, Italy; London, England; Madrid, Spain; Paris, France; Prague, the Czech Republic; Shanghai, China; and Tel Aviv, Israel, among other locations.